Yesterday, in Chapter 6, we talked about the fact that no one can find any proof of the existence of Darius the Mede so they think that the book of Daniel is fiction.  I have never heard of any of these people, accept a little about Cleopatra, and they are real and even though they aren’t named, there is evidence of their existence and names.

So, out of curiosity, I would like read a bit more on…

1 In the first year of Belshazzar king of Babylon Daniel had a dream and visions of his head upon his bed: then he wrote the dream, and told the sum of the matters.

“First year of Belshazzar” – probably 553 B.C.  The events of chapter 7 preceded those of chapter 5.

2 Daniel spake and said, I saw in my vision by night, and, behold, the four winds of the heaven strove upon the great sea.

The great sea” – the world of nations and peoples.

3 And four great beasts came up from the sea, diverse one from another.

“Beasts” the insignia or symbols of many Gentile nations were beasts (or birds) of prey.

4 The first was like a lion, and had eagle’s wings: I beheld till the wings thereof were plucked, and it was lifted up from the earth, and made stand upon the feet as a man, and a man’s heart was given to it.

7:4-7 – the lion with an eagle’s wings is a cherub, symbolizing the Neo-Babylonian Empire.  The rest of v. 4 perhaps reflects the humbling experience of Nebuchadnezzar, as recorded in chapter 4.

The bear raised up on one of its sides refers to the superior status of the Persians in the Medo-Persian federation.  The three ribs may represent the three principal conquests: Lydia (546 B.C.), Babylon (539) and Egypt (525).

The leopard with four wings represents the speedy conquests of Alexander the Great (334-330 B.C.), and the four heads correspond to the four main divisions into which his empire fell after his untimely death in 323.

Macedon and Greece (under Antipater and Cassander), Thrace and Asia Minor (under Lysimachus), Syria (under Seleucus I), the Holy Land and Egypt (under Ptolemy I).

The fourth, unnamed, beast, with its irresistible power and surpassing all its predecessors, points to the Roman Empire.  Its ten horns correspond to the ten toes of 2:41-42.

5 And behold another beast, a second, like to a bear, and it raised up itself on one side, and it had three ribs in the mouth of it between the teeth of it: and they said thus unto it, Arise, devour much flesh.

6 After this I beheld, and lo another, like a leopard, which had upon the back of it four wings of a fowl; the beast had also four heads; and dominion was given to it.

7 After this I saw in the night visions, and behold a fourth beast, dreadful and terrible, and strong exceedingly; and it had great iron teeth: it devoured and brake in pieces, and stamped the residue with the feet of it: and it was diverse from all the beasts that were before it; and it had ten horns.

“Ten horns” – indicative of the comprehensiveness of the beast’s sphere of authority.

8 I considered the horns, and, behold, there came up among them another little horn, before whom there were three of the first horns plucked up by the roots: and, behold, in this horn were eyes like the eyes of man, and a mouth speaking great things.

9 I beheld till the thrones were cast down, and the Ancient of days did sit, whose garment was white as snow, and the hair of his head like the pure wool: his throne was like the fiery flame and his wheels as burning fire.

11 I beheld then because of the voice of the great words which the horn spake: I beheld even till the beast was slain, and his body destroyed, and given to the burning flame.

12 As concerning the rest of the beasts, they had their dominion taken away: yet their lives were prolonged for a season and time.

13 I saw in the night visions, and, behold, one like the Son of man came with the clouds of heaven, and came to the Ancient of days, and they brought him near before him.

“Like the Son of man” – see Rev 1:13.  This is the first reference to the Messiah as the Son of Man, a title that Jesus applied to Himself.  He will be enthroned as ruler over the whole earth (previously misruled by the four kingdoms of men), and His kingdom “shall not be destroyed”, whether on earth or in heaven.

14 And there was given him dominion, and glory, and a kingdom, that all people, nations, and languages, should serve him: his dominion is an everlasting dominion, which shall not pass away, and his kingdom that which shall not be destroyed.

15 I Daniel was grieved in my spirit in the midst of my body, and the visions of my head troubled me.

16 I came near unto one of them that stood by, and asked him the truth of all this. So he told me, and made me know the interpretation of the things.

17 These great beasts, which are four, are four kings, which shall arise out of the earth.

18 But the saints of the most High shall take the kingdom, and possess the kingdom forever, even forever and ever.

19 Then I would know the truth of the fourth beast, which was diverse from all the others, exceeding dreadful, whose teeth were of iron, and his nails of brass; which devoured, brake in pieces, and stamped the residue with his feet;

20 And of the ten horns that were in his head, and of the other which came up, and before whom three fell; even of that horn that had eyes, and a mouth that spake very great things, whose look was more stout than his fellows.

21 I beheld, and the same horn made war with the saints, and prevailed against them;

22 Until the Ancient of days came, and judgment was given to the saints of the most High; and the time came that the saints possessed the kingdom.

23 Thus he said, The fourth beast shall be the fourth kingdom upon earth, which shall be diverse from all kingdoms, and shall devour the whole earth, and shall tread it down, and break it in pieces.

24 And the ten horns out of this kingdom are ten kings that shall arise: and another shall rise after them; and he shall be diverse from the first, and he shall subdue three kings.

“Ten kings” – all the political powers that will arise out of the fourth kingdom – not necessarily simultaneously.

“Three kings” – some of the ten.  Three often signified a small, indefinite number.

26 But the judgment shall sit, and they shall take away his dominion, to consume and to destroy it unto the end.

27 And the kingdom and dominion, and the greatness of the kingdom under the whole heaven, shall be given to the people of the saints of the most High, whose kingdom is an everlasting kingdom, and all dominions shall serve and obey him.

28 Hitherto is the end of the matter. As for me Daniel, my cogitations much troubled me, and my countenance changed in me: but I kept the matter in my heart.

Daniel 7:6 describes a vision in which a kingdom is represented by a leopard with four wings and four heads. The wings represent great speed, but the heads signify that the kingdom was split into several domains.

The leopard symbolizes the Greek kingdom of Alexander the Great, a kingdom that was established with lightning speed but that broke into several parts, ruled by various Greek dynasties after his death.

The Ptolemies were a dynasty of Greek kings who ruled Egypt from just after the death of Alexander the Great to the time of annexation of Egypt by Rome. Their history is closely connected to that of the region later known as Palestine in the third century B.C. (the Ptolemies ruled Palestine and thus also Jerusalem from 323-200 B.C.).

Important Ptolemaic rulers were as follows:

Ptolemy I Soter (323/305-282 B.C.): Immediately after the death of Alexander in 323, his general Ptolemy headed to Egypt and seized control of the administration, assuming the title “king” in 305.

Ptolemy was highly intelligent and, after having taken control of a wealthy and relatively isolated domain (Egypt), was able to begin a dynasty that would last for over two centuries.  His capital, Alexandria, was a Greek city in Egypt.  Ptolemy was the “king of the South” in 11:5.

Ptolemy II Philadephus (282-246 B.C.): the reign of this king was prosperous and marked by impressive building projects, such as the completion of the lighthouse of Pharos and the library of Alexandria.

He was also engaged in wars with the Seleucids over control of Palestine and Anatolia. Ptolemy II did much to establish Greek culture and education in Egypt and elsewhere but offended his Greek subjects by marrying his full sister, Arsinoe.

Ptolemy II Euergetes (246-222 B.C.): The reign of this king was marked by further wars with the Seleucids, brought about by the fact that the Seleucid king, Seleucus II, murdered Ptolemy’s sister Berenice and her son. Berenice was the “daughter of the king of the South” in 11:6.

Ptolemy IV Philopator (222-205 B.C.): This king is often described as a weak ruler, although he did defeat Antiochus III of Syria at Raphia in 217 B.C.

He deployed Egyptian troops in his army (instead of using exclusively Greek soldiers), and some believe that this sowed the seed for future native revolts by the Egyptians. He is the “king of the South” of 11:11.

Ptolemy V Theos Epiphanes (204-180 B.C.): During the administration of this regent Palestine was lost to the Seleucid kingdom (200 B.C.). The Rosetta Stone commemorates his coronation.

Ptolemy VI Philometor (180-145 B.C.): During his reign Ptolemaic control of Egypt nearly collapsed. Antiochus IV fought his way to Memphis in Egypt in around 168 B.C. and no doubt would have taken control of the country had he not been forced out by a delegation from Rome.

Thereafter, Ptolemaic power declined as members of the royal family struggled for control and as Rome began to take an increasingly important role in the affairs of Egypt. 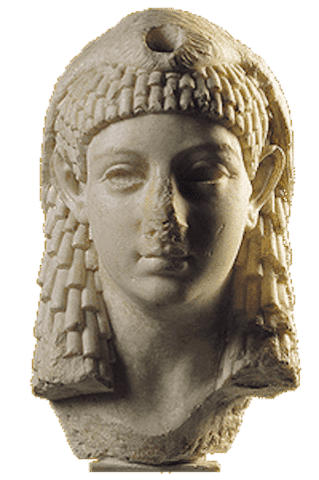 The last Ptolemy to rule Egypt was the famous Cleopatra VII (51-30 B.C.). Intelligent and resourceful (she was the only Ptolemy who gained the loyalty of Egyptians by learning to speak Egyptian, but she also murdered her brother, Ptolemy XIV, in order to secure the throne for herself).

She used sexual relations with Julius Caesar and later with Mark Antony to better her political position in dealing with Rome. Her alliance with Antony proved her undoing, however. He was defeated by Octavian (Augustus) at Actium in 31 B.C., and she committed suicide when she realized that Octavian was implacable toward her.