The Pharisees were bad, but as I said yesterday, they weren’t the worst, so tomorrow we’ll look at…

Matthew 4
The Temptation in the Wilderness

1 Then was Jesus led up of the Spirit into the wilderness to be tempted of the devil.

“Led up to the Spirit…to be tempted” – this testing of Jesus which was divinely intended  has as its primary background Deut 8:1-5, from which Jesus also quotes in His first reply to the devil.

There Moses recalls how the Lord led the Israelites in the wilderness 40 years:

“To humble thee, and to prove thee, to know what was in thine heart, whether thou wouldest keep his commandments, or no (Deut 8:1-5).

Here at the beginning of His ministry Jesus is subjected to a similar test and shows himself to be the true Israelite who lives “by every word that proceedeth out of the mouth of The LORD.”

And whereas Adam failed the great test and plunged the whole race into sin (Gen 3), Jesus was faithful and thus demonstrated His qualification to become the Savior of al who receive Him.

It was, moreover, important that Jesus be tested/tempted as Israel and we are, so that He could become our “merciful and faithful high priest (Heb 2:17) and thus be “able to succor them that are tempted” (Heb 2:18, see Heb 4:15-16).

Finally, as the one who remained faithful in temptation He became the model for all believers when they are tempted.

The devil is a personal being, a fallen angel, not a mere force or influence.  He is the great archenemy of God and the leader of the hosts of darkness.

2 And when he had fasted forty days and forty nights, he was afterward an hungred.

3 And when the tempter came to him, he said, If thou be the Son of God, command that these stones be made bread.

“If thou be the Son of God” – the devil knows exactly who Jesus is, but is wanting Him to use His supernatural powers as the Son of God for His own ends.

4 But he answered and said, It is written, Man shall not live by bread alone, but by every word that proceedeth out of the mouth of God.

Just as God gave the Israelites manna in a supernatural way (Deut 8:3), so also man must rely on God for spiritual feeding.  Jesus relied on His Father, not His own miracle power, for provision of food.

5 Then the devil taketh him up into the holy city, and setteth him on a pinnacle of the temple,

“Temple” – the temple, including the entire temple area, had been rebuilt by Herod the Great.

6 And saith unto him, If thou be the Son of God, cast thyself down: for it is written, He shall give his angels charge concerning thee: and in their hands they shall bear thee up, lest at any time thou dash thy foot against a stone.

7 Jesus said unto him, It is written again, Thou shalt not tempt the Lord thy God.

8 Again, the devil taketh him up into an exceeding high mountain, and sheweth him all the kingdoms of the world, and the glory of them;

9 And saith unto him, All these things will I give thee, if thou wilt fall down and worship me.

10 Then saith Jesus unto him, Get thee hence, Satan: for it is written, Thou shalt worship the Lord thy God, and him only shalt thou serve.

11 Then the devil leaveth him, and, behold, angels came and ministered unto him.

12 Now when Jesus had heard that John was cast into prison, he departed into Galilee;

13 And leaving Nazareth, he came and dwelt in Capernaum, which is upon the sea coast, in the borders of Zabulon and Nephthalim:

“Capernaum” – although not mentioned in the Old Testament, it was evidently a sizable town in Jesus’ day.  Peter’s house there because Jesus’ base of operations during His extended ministry in Galilee (see Mk 2:1, 9:33).

14 That it might be fulfilled which was spoken by Esaias the prophet, saying,

15 The land of Zabulon, and the land of Nephthalim, by the way of the sea, beyond Jordan, Galilee of the Gentiles;

4:15-16 – another Messianic prophecy from Isaiah.  Jesus spent most of His public ministry “in the land of Zabulon and Nephthlim, which is north and west of the sea of Galilee (see Isa 9:6-7).

16 The people which sat in darkness saw great light; and to them which sat in the region and shadow of death light is sprung up.

17 From that time Jesus began to preach, and to say, Repent: for the kingdom of heaven is at hand.

“From that time” – these words indicate an important turning point in the life of Jesus and occur three times in Matthew’s Gospel (see also 16:21, 26:16).  Something these words mark the three main sections of the book.

“Repent” – Jesus began His public ministry with the same message as John the Baptist (3:2).  The people must repent because God’s reign was drawing near in the person and ministry of Jesus Christ.

We must remember that even though it seems like Jesus was here a very long time ago it was just the other day because God doesn’t live according to time, only we do.  With God there is no day or night, so as Peter said, “…one day is with the Lord as a thousand years…” (2 Pet 3:8).

Repentance is more than a change of mind or feeling sorry for one’s sins.  It is a radical and deliberate change that affects one’s intellect, emotions and will.

For an alcoholic to stop drinking, for a drug addict to stop using, for a smoker to stop smoking, for a glutton to stop overeating are all extremely difficult, but can be done.  Yet, to obtain complete repentance within your heart we need Jesus Christ.

We are able to control our behavior, some better than others, but nobody can change their own heart – read Matt 6:2-33 for a better understanding. 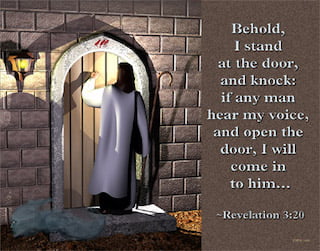 18 And Jesus, walking by the sea of Galilee, saw two brethren, Simon called Peter, and Andrew his brother, casting a net into the sea: for they were fishers.

19 And he saith unto them, Follow me, and I will make you fishers of men.

“Fishers of men” – evangelism was at the heart of Jesus’ call to His disciples.  I’m not an evangelist.

20 And they straightway left their nets, and followed him.

21 And going on from thence, he saw other two brethren, James the son of Zebedee, and John his brother, in a ship with Zebedee their father, mending their nets; and he called them.

22 And they immediately left the ship and their father, and followed him.

23 And Jesus went about all Galilee, teaching in their synagogues, and preaching the gospel of the kingdom, and healing all manner of sickness and all manner of disease among the people.

“Syria’ – the area north of Galilee and between Damascus and the Mediterranean Sea.

“Lunatick” – the Greek word for this expression originally meant “moonstruck” and reflects the ancient superstition that seizures were caused by changes of the moon.

“Palsy” –  a transliteration of the Greek, paralytic, has come directly into English.  Greek physicians were among the best in ancient times, and many of our medical terms come from their language.

25 And there followed him great multitudes of people from Galilee, and from Decapolis, and from Jerusalem, and from Judaea, and from beyond Jordan.

The Pharisees were an influential political and religious sect during the Second Temple period. During this time of increasing foreign influence, they promoted the faithful observance of Jewish law at both a national and an individual level.

The exact meaning of the term Pharisee remains uncertain. The noun derives from the Hebrew verb meaning “to separate” or “to distinguish.”

The title appears to have been applied originally in a negative sense when the Pharisees were expelled from membership in the Sanhedrin under John Hyrcanus (135-104 B.C.), though it was later understood in a positive sense either as “those who separated themselves” from all sources of ritual uncleanness (see Mk 7:1 -23; Gal 2:12-13) or “those who interpreted the law precisely” (Josephus’s Antiquities, 17.2.4).

The Pharisees believed that God was the sovereign Creator, who expressed His will to humanity through Scripture. Moreover, He granted humanity the gifts of responsible moral choice and reason in order to apply the Scriptures to this life in preparation for the resurrection, judgment and the life to come (cf. Acts 23:6-8).

Members of this sect carefully observed the Mosaic Law, systematically interpreting and adapting it to the conditions of their own time in order to maintain a sense of purity among the populace (Matt 23:2-3), much like the Catholics.

This system of interpretation and way of life were transmitted by generations of teachers and became known variously as the oral law, the tradition of the elders (Mk 7:3-5; Gal 1:14),the works of the law (Rom 3:20-28; Gal 2:16—3:10) or simply the Halakhah (from a Hebrew word meaning “walk”; Halakhah is traditional Jewish teaching that governs behavior and religious practice).

The Pharisees saw themselves as the heirs of a vast body of interpretative tradition that enabled them to function as reliable guides for the Jewish people during a tumultuous era (Rom 2:17-20).

Although some Pharisees came to believe in Jesus as the Christ (Acts 15:5; Phil 3:4-11), the majority justified their opposition to him on the grounds that Jesus ostensibly taught on his own authority (Matt 7:29; Jn 3:1 -3; 8:13), as well as on the basis of his interpretations of various issues that were of vital concern to them. 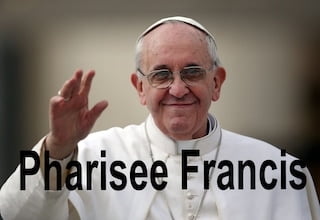 Again, we see the Catholic religion.

Jesus criticized the Pharisees on the grounds that, for all of their commendable observance of rules and traditions, they were fundamentally unrepentant, neither knowing God nor loving people (Matt 23).

And again, the Catholics to a Tee.