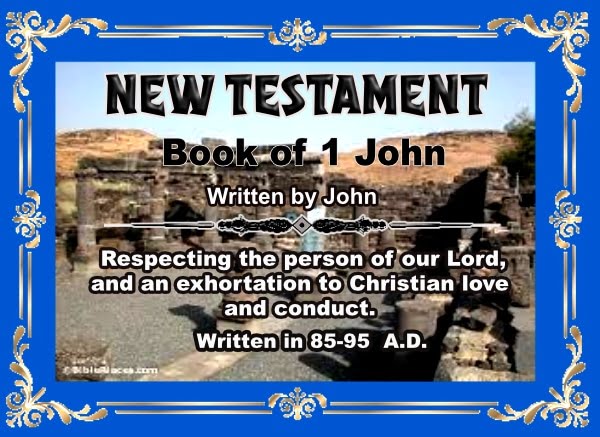 Summary of the Book of 1 John

The book of 1stJohn is a General Epistle (Apostolic Letter). It is written by the Disciple/Apostle John around 85-95 A.D., probably from Ephesus.

The key personalities are the Apostles Peter and Paul. Its purpose was to warn about the increasing threat of false teachings and to reassure Christians of their faith and love in Jesus Christ.

It was written to combat false teachings that had to do with the denial that Jesus had a genuine human body (1:1).

This Gnostic view of matter as being evil led to two responses, asceticism or licentiousness. He very clearly writes to give the true tests of a true Christian.

These tests also contradicted the Gnostic licentious approach to Christianity. He gives several means to measure the reality of one’s conversion experience.

“This then is the message which we have heard of him, and declare unto you, that God is light, and in him is no darkness” (1:5).

He wrote that if sins were confessed He would cleanse them, because Jesus is…

“…the propitiation for our sins: and not for ours only, but also for the sins of the world” (2:2).

Because John was aware of the continuing attack of false teachings, he then urged believers not to love and follow after the world because it was not of the Father, and would ultimately pass away. Discernment is necessary to thwart the constant attacks of heresy.

Chapters 3-4 – John teaches about the love of God and that through His love He sent Jesus:

“He that committeth sin is of the devil; for the devil sinneth from the beginning.  For this purpose the Son of God was manifested, that he might destroy the works of the devil” (3:8).

Therefore, believers should love each other not only with words but also,

Chapter 5 – John exhorts Christians to live by faith because through our faith in Christ we overcome the wickedness of the world.

In addition, John writes one of the most powerful and assuring statements concerning the work of Jesus on the cross:

John wanted all believers to know 100%, that because of their faith and trust in Jesus Christ they would spend all of eternity with Him.