Solomon believed that there is a time and place for everything, whether it be good or bad. He believes that you must seek guidance from God to truly know what your path in life is. 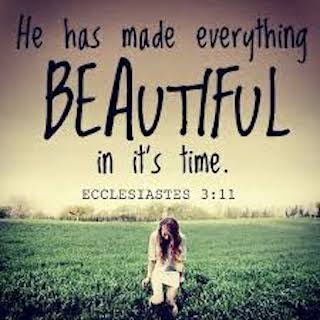 1 To everything there is a season, and a time to every purpose under the heaven:

9 What profit hath he that worketh in that wherein he laboureth?

10 I have seen the travail, which God hath given to the sons of men to be exercised in it.

11 He hath made everything beautiful in his time: also he hath set the world in their heart, so that no man can find out the work that God maketh from the beginning to the end.

12 I know that there is no good in them, but for a man to rejoice, and to do good in his life.

13 And also that every man should eat and drink, and enjoy the good of all his Labour, it is the gift of God.

14 I know that, whatsoever God doeth, it shall be forever: nothing can be put to it, nor any thing taken from it: and God doeth it, that men should fear before him.

16 And moreover I saw under the sun the place of Judgment, that wickedness was there; and the place of righteousness, that iniquity was there.

17 I said in mine heart, God shall Judge the righteous and the wicked: for there is a time there for every purpose and for every work.

18 I said in mine heart concerning the estate of the sons of men, that God might manifest them, and that they might see that they themselves are beasts.

19 For that which befalleth the sons of men befalleth beasts; even one thing befalleth them: as the one dieth, so dieth the other; yea, they have all one breath; so that a man hath no preeminence above a beast: for all is vanity.

20 All go unto one place; all are of the dust, and all turn to dust again.

22 Wherefore I perceive that there is nothing better, than that a man should rejoice in his own works; for that is his portion: for who shall bring him to see what shall be after him?

The Harper Song
from the Tomb of King Intef

Dating from the late 14th through the early 13th centuries B.C., three funerary banquet sons have been discovered on the walls of a tomb near Thebes, Egypt.

The tomb belonged to a certain Neferhotep, the deceased whom the songs honor.  Two of them offer somewhat contradictory attitudes regarding death and the afterlife.

In Song I the harpist sings of the passing generations in which children are born, breathe life and begin moving inexorably toward the grave.  The sun deity rises and sets continuously, but death is inevitable.  The singer urges Neferhotep to forget the evil past and to remember only joyous occasions, for death is the great equalizer – indiscriminately claiming those with full granaries and those with nothing.

Song III has a more positive tone.  Although it too declares that death is inescapable, it asserts that people are not equal after this event.  Neferhotep’s devotion to the Egyptian gods will be rewarded in the afterlife; he will be remembered both by his god and by people for his religiosity.

Because of his piety, Neferhotep’s enemies will be eternally defeated and his soul declared justified.  In fact, he will be happier in the afterlife than he ever was on Earth.

Parallels for both songs can be found in Ecclesiastes.  Ecclesiastes 1:4-5 speaks of generations coming and going and of the continual cycle of the rising and setting of the sun.  surely death is inevitable and overtakes us all (2:14, 16; 9:2-3).

Indeed, it equalizes humanity, since no one can take his or her achievements into the afterlife, but must leave them to the next generation (cf 2:18-19).

In his summary statement, however, the Teacher concludes that a person should honor God and obey His commandments, because every action will be judged by Him (12:13-14).

Unlike Neferhotep’s Song III, the Teacher does not suggest that outward religiosity and cultic piety will be rewarded.  God sees the hidden things as well as the obvious, and living a life of true wisdom begins with proper understanding and fear of the Lord (cf Prov 1:7).